Middle schools are where the required coding curriculum officially begins for all students. The bullet points below identify the required coding and computational thinking content areas from the ADST Curriculum. Note the videos and examples linked beside each point as possible entry points to gain more understanding.

Middle School Goal: Develop an understanding of block based coding environments and transfer this knowledge to introductory text based coding.

Note: The selection of suggested instructional tools were chosen to facilitate the growth trajectory of moving a student through understanding block-based coding to the creation of simple HTML & CSS web pages. 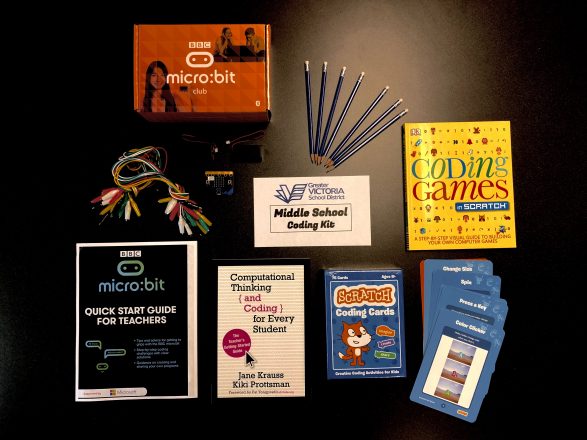 The following resources were purchased for each middle school:

Scratch – Scratch is the world’s most popular and widely supported block-based programming tool. It’s available as a software download or a web-based tool that works perfectly with SD61 Chromebooks.

Micro:Bits – A credit card size miniature computer that can be programmed through a number of accessible pathways. You can program the micro:bit using block-based platforms or using text-based code such as Python or JavaScript. It makes an ideal tool to build a bridge between block-based and text-based environments.

From Games to Computer Science with the Micro:Bit

HTML & CSS – The structural code that most web pages are built on. Students should have a basic understanding of the “nuts & bolts” of designing a simple web page.

Kids and Coding: Resources for Educators